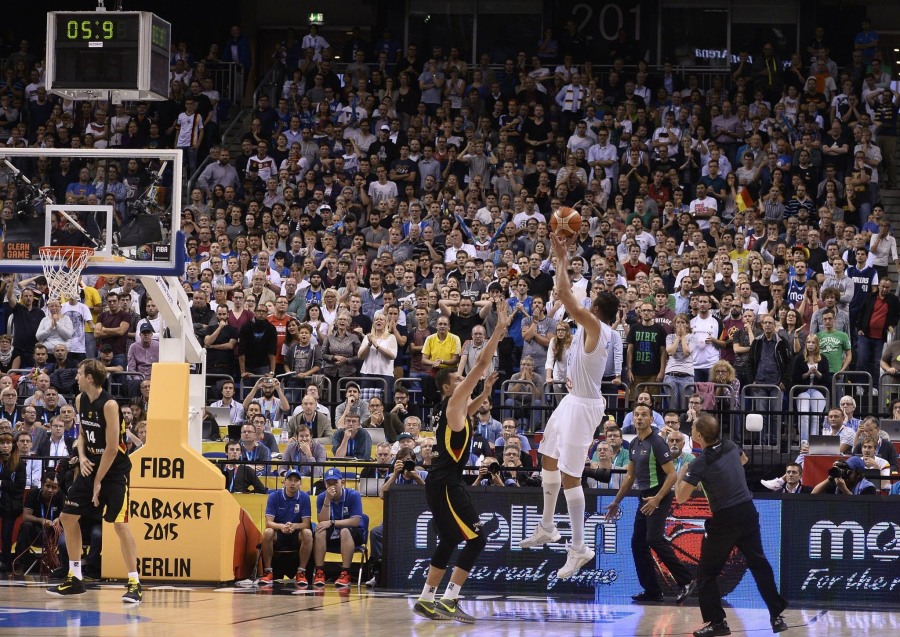 A 300/1 favorite to win her US Open Semifinal, Roberta Vinci shocked the Tennis and Sport World by stopping Serena Willams’ run to a Calendar Year Grand Slam.

After an amazing comeback win, Vinci won fans heart with a joyful and open-heart on-the-court interview.

With an emotional letter on the Players’ Tribune, NBA legend Kobe Bryant announced his upcoming retirement from Pro Basketball.

The rest of the 2015-16 Lakers Season is going to be a long Farewell Tour to the Black Mamba, a unique catalyst of feelings, and an occasion to reflect on a long and incredible career.

On September 22 Bayern Munich striker Robert Lewandowski entered the game against Wolfsburg right after halftime, but not even the most optimistic fan would have ever dreamed what happened in the second half first 15 minutes.

The Polish number 9 made history, scoring 5 goals in a 8 minutes and 59 second arch. And they were one better than the other.

But in the Stadium where his legacy started, he reminded us why he’s the number one.

Young Italian freestyle Swimmer Gregorio Paltrineri has had a breakout year in 2015.

He finally consecrated himself with winning the Gold medal in 1500m Freestyle at Kazan’s World Championship, but he was able to do more of that, by breaking the oldest Swimming World Record on books, the 1500 Freestyle Short Course one, made in 2001 by Swimming Legend Grant Hackett.

After a long series of injuries, in 2015 Danilo Gallinari reminded us why he’s one of the best European players of his generation.

He scored an impressive 47-point-game Career High early in the year with his Denver Nuggets, but his most impressive performances were during the 2015 EuroBasket, where he led his Italian team through a though Group Stage with lots of impressive plays and numbers.

His clutch Game-Tying shot against the host German team has been an inexplicable moment to witness live.

My generation has grown up with MSN messenger, the first viral system to chat and communicate with friends worldwide.

Windows Live Messenger was discontinued in 2013, but the acronym regained new life with the explosion of the outstanding FC Barcelona trio of striker: Lionel Messi, Luis Suarez and Neymar led the Catalan team to their second Treble (first team in Football History to accomplish that) in 6 years in 2015, scoring (as of today) 135 goals in the calendar year for Barça.

The Golden State Warriors won their first NBA Championship in 40 years, after an historical season (their 83 wins, combining Regular Season and Playoffs, is the 3rd highest in NBA History). But they were often labeled as ‘lucky’.

After that claims, they started the 2015-16 NBA Season with 24 consecutive wins, crashing by far the previous League Record (no team had done better than a 15-0 start in NBA history) but also making an all-time record for North American Professional Sports.

Basketball fans could have feel that 2015 was going to be the ‘Warriors Year’ already on January 23rd.

Golden State entered the second half against the Sacramento Kings with the game in balance, when Klay Thompson made a 2-pointer for the 61-58 Warriors lead, with 9’45” remaining to play.

He was only the third player in tennis history to reach, in a calendar year, all 4 Major Finals (after Rod Laver and Roger Federer), but the surprising loss to Stan Wawrinka in Roland Garros Final prevented him from a Year (and Career) Grand Slam. For now.

Flavia Pennetta wins US Open and announces her retirement from Tennis

Roberta Vinci’s exploit against Serena Williams was only one half of the fantastic cake baked by Italian Tennis Player in 2015 US Open: the american Slam saw a first-ever all-Italian Major Final in Pro-Tennis history between Vinci and Flavia Pennetta, two longlife friends both coming from Puglia.

Pennetta later prevailed over her fellow national, conquering her first Grand Slam title (on her first Final), and after that she shocked Tennis World by announcing her retirement, in ‘Sampras style’.

After 16 games into the 2014-15 Premier League Season, Leicester Football Club was at the bottom of England’s main Football League, with only 2 wins and 10 overall points.

Today, with 16 games into the current season, the Foxes are on top of England’s Football, with 10 won games and 35 points.

One of the reasons for such a turnaround is Jamie Vardy, a striker whom was playing semi-professional league Football only in 2012, able to make a new Premier League Record scoring in 11 consecutive matches.

What no one could have ever imagined is that, as of today, Chelsea is living an authentic nightmare and one of the most unthinkable and quick downfalls in Football History, being only one point over Relegation zone after their loss to Leicester, a one resulted in the end of Mourinho’s second spell at Stamford Bridge.

2009/10 was a season of ‘firsts’ for Italian Sport. For example, FC Internazionale became the first Italian Football Team Ever to accomplish the ‘Treble’. It was also the season, in Basketball, of the First Ever Promotion to ‘Serie A1’ for Dinamo Sassari.

I started the piece with an amazing upset in 2015, I end it with another one.

The Kentucky Wildcats entered the NCAA Basketball 2015 Final Four with a 38-0 record, looking to becoming the first College Team in almost 40 years to accomplish the ‘Perfect Season’ and doing that with the best overall record.

Between Calipari’s Team and the Championship Game there were the Wisconsin Badgers, led by National Player of the Year Frank Kaminsky.

The Badgers took down the previously unbeaten Wildcats on the grand stage of the Final Four. And they did it in fashion. 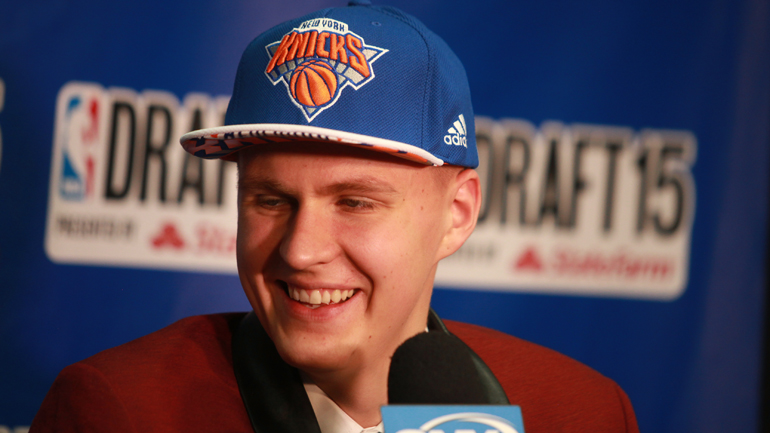 Kristaps Porzingis first impact with the NBA surely wasn’t an unforgettable one.

With six games into the season, the Latvian rookie is on his way to turn many doubters into believers.

“I expect more of myself, so hopefully be better next time.”

Porzingis after his Pre-Season debut with the Knicks: 7 points (2/6 FG) in 21′ against Brazilian team Bauru.

His positive attitude towards game improvement can easily be seen in the Knicks first two weeks of Regular Season, although the W/L record isn’t exciting.

Porzingis NBA debut came against the shorthanded Milwaukee Bucks, who played without their two most promising players (Giannis Antetokounmpo and Jabari Parker).

Kristaps’ firsts NBA minutes were a “bust alert”: a couple of soft moves under the boards followed by two missed long jumpers.

Despite that, there was room also for optimism: since the first play Porzingis always looked like someone involved in the game and not alienated by that, continually trying to help the team and make the best of his skills, for example by using his body defensively.

After his first NBA quarter the music changed: coming back in the court with the Knicks safely up by 11, Porzingis showed a little more of his offensive potential, looking quite comfortable playing as a modern PF, like a young Andrea Bargnani.

What differs from today’s Nets player is, most of all, the attitude: Knicks’ rookie is always (and I mean ALWAYS) giving it all on the court, spending all of his energy, perhaps too much of it: as of today, he’s first in the NBA for Personal Fouls with 25, tied by Sacramento Kings’ Greek big man Kosta Koufos.

The attitude on the court is crucial, for a young rookie (even more a European one), to gain the trust of his teammates and the respect of the opponents. Under the boards Porzingis is already someone to be taken care of: his ability to grab offensive rebounds (as of today second only to the dominant Andre Drummond of these first two weeks) could represent a huge asset in Knicks’ offense: so far the 2015-16 Knicks are third in the NBA for offensive rebound percentage and first for total ORB, shooting a 6.9% more shots than the last season without significant drops in FG%.

The most challenging of Knicks’ first 6 games for Porzingis was surely last Monday matchup against the San Antonio Spurs and their renovated front court. In my opinion, this was Kristaps best game so far, because he showed off his personality by maintaining his game level at high peaks.

For example, creating second chance points with his hustle under the boards.

Playing quick Pick-and-Rolls with a smart playmaker like Jose Calderon.

Facing a big-man like LaMarcus Aldridge with a perfect defensive position.

And last (but not least), athleticism and energy on offensive rebounds (with his putback slams becoming a nice cliché).

But what is impressing me about the Latvian rookie is his professional personality, not caring about stats but always focused towards team playing and winning.

“There’s little things that I didn’t do well to help us finish the game well,” Porzingis said. “I was expecting a better game from myself. I take a lot of responsibility for what happened.”

Porzingis after last night game against the Bucks, lose at home despite his second career double-double (14 points and 13 rebounds).

It’s too soon to tell if Kristaps Porzingis will become the 2020s Dirk Nowitzki as an amazing and rare combination of height, athleticism and skills, but the first signals are surely encouraging and on its way to disprove Phil Jackson’s summer comments.

Regarding Knicks Fans welcoming at an NBA Draft, it is interesting to notice a similarity with another Knicks European Lottery Pick, current Nuggets’ forward Danilo Gallinari.

And as it can be seen, revenge is a dish served cold.

May the Porz be a Force for the Knicks? 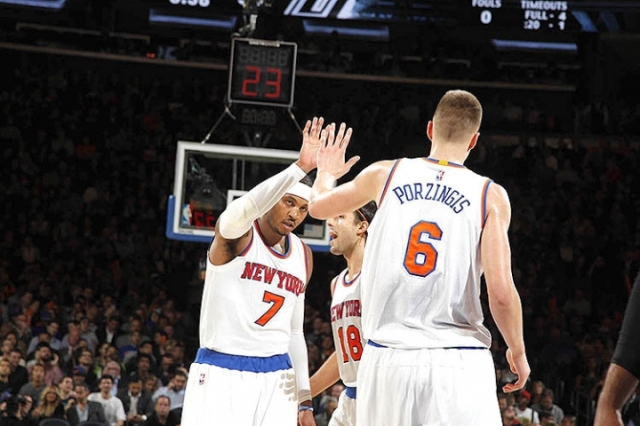