The upcoming NBA Draft is full of hype, rumoured to be the best one in more than 10 years.

The main prospects have been in the mind of several NBA GMs for months, believed to be able to change their teams’ history.

Pick number 20 belongs to the Toronto Raptors and, as Commissioner Adam Silver approached the stage to announce their choice, a lot of names were being debated between fans and expert, given also the fact that nobody had already broken the news on Twitter.

“With the 20th pick, in the 2014 NBA Draft, the Toronto Raptors select Bruno Caboclo, from Brazil.”

It was a shock: almost nobody knew about the existence of this young 6-foot-9 small forward from Osasco, Brazil.

From the little information available online, he looked like a promising player, with some physical resemblance to league MVP Kevin Durant, but he was nothing more than a rough diamond.

At the beginning of Raptors’ Team Practice before the NBA Global Game in London, all the players were surrounded by a big group of reporters. All but one, standing alone, almost waiting to be interviewed by a reporter: Bruno Caboclo.

“I think I’m having a good development and adaptation to the NBA”, he says with a shy voice, looking surprised by the question and by the fact of being actually interviewed by someone, “I keep in growing into the team and the league. I think that this is the best process, a very good one. I’m just doing very well!”

The adaptation to the NBA is a slow and tough process for every young player, but it could be harder for an international player. Especially if, like Caboclo, you come from an average basketball league.

The current season is Bruno’s second with the Raptors, although so far Caboclo has played in just 11 NBA games for Toronto, mostly in the so-called garbage time; the young Brazilian is spending most of his time with his franchise own D-League team, the Raptors 905.

His numbers are not the greatest, but that’s understandable when you get the chance of meeting with him face to face: you would be in the presence of an athletic ‘freak of nature’, with an incredible wingspan (one of the biggest among all NBA players) and a great athletic potential, but with the face of a young teenager, if not of a child.

He will be 21 years old in September, but you struggle even to give him an age of 14 or 15 years.

Despite all of this, Toronto highly believes in the young Bruno: GM Masai Ujiri has already exercised the team option on his contract for the 2016-17 season, and the team wanted Caboclo to make the trip to London, with the main team, to play in the NBA Global Games against the Orlando Magic.

“I love the chance to play abroad, outside North America”, he says, “I think it’s a great chance to improve my NBA experience and also my relationship with teammates!”

You could feel by the introduction that Bruno’s like a lone wolf in Raptors’ Locker Room.

That couldn’t be more wrong: the presence, in the team, of another Brazilian player in Lucas Nogueira and the overall young age average make the Raptors a perfect environment, something that is easily felt by watching Toronto’s practices, for a shy and timid player and personality like Caboclo’s one.

“It’s also good for the NBA”, Bruno continues, “showing itself in countries like UK or also my hometown Brazil, which usually follows more soccer rather than basketball.”

“Being together for a week, with our families and as a ‘family’ ourselves”, says Raptors coach Dwane Casey, who usually speaks highly of Caboclo, “should help us a lot, especially for guys whom spends less time with the team.”

NBA is not Bruno’s only thought: “I would love to make the team for Rio 2016 Olympics”, he says, “It would be like a dream! But there’s really a lot of work to do and there’s a long road in front of me: I’m still very young and there are other players more ready to perform in the Olympic Games rather than me.”

During that ‘famous’ NBA Draft, ESPN’s analyst Fran Fraschilla made a famous statement about Caboclo, defining him “two years away from being two years away”.

Having passed these first two years, it is worth to ask ourselves about if really the young Bruno is now two years away.

Will the young Brazilian Kevin Durant and his 12-year-old lookalike face disprove the doubters, live up to the hype and make it in the biggest league on the planet?

Ujiri, Casey and the entire Raptors organisation have absolutely no doubt about that. 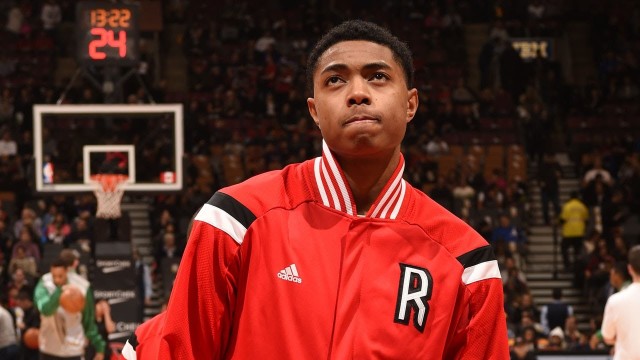